Millions of years ago, when dinosaurs roamed around Kozina, two underground caves were formed under the Karst edge (* prehistoric details are purely the author’s speculation). The crash of the deadly meteorite, that rearranged the cards of living species, also caused the roofs of these caves to collapse, which many years later led to ideal conditions for one of the best climbing centers in the whole world, which even today, after several decades of conquer hasn’t lost its momentum. Apart from hundreds of routes covering the whole spectrum of difficulty, the crags are situated in a picturesque rural setting in the corner of Slovenia blessed with a mild climate. Maybe some routes are polished and maybe the crowds in peak season are not your thing, and despite the fact that climbers aren’t the most welcome visitors here, the Osp area can without shadow of doubt be mentioned in the same breath as any other climbing Mecca.

Because of two different approaches we divided the Osp area on two major climbing sectors. All the information you need you can find on links lower down.
Sector Behind the village and sector Babna (The Balcony)
Sector Srnjak, The big wall and The big cave

CLIMATE
The ideal periods for climbing are spring and autumn, when you can hardly miss a good day – you can climb even in the rain (especially Mišja). Most of the winter has excellent conditions, unless you get one of the cold, windy, rainy days. When it gets dangerously hot in the summer, you can start looking for shade: it can be found in Banje, on the sides of Mišja and in Črni Kal. The big cave is a different story: you can climb deep into summer and on nice winter days, but it depends on the lake that appears out of nowhere – unless you have a kayak with you. In the winter you can expect a couple of degrees more than the forecast due to the shape of the wall. The shortest day is until 16h. After long periods of rain the tufas can get quite wet. 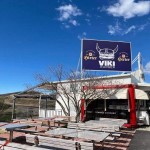 A legendary meeting point for climber since 1989. The best place to drink a coffee and have a breakfast in the morning while waiting for your friends to go climbing in Mišja peč, Osp or Črni kal. And of course, the best spot to drink a beer or two and eat a magnificent meat/vegetarian/vegan burger after perfect climbing day. They also make their own cakes and ice cream. A must place to visit! Free WIFI!

SLEEP we had experienced… 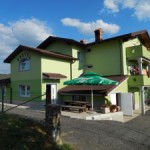 Hostel Ociski raj is located in the heart of climbing areas. From hostel to Črni Kal is only 7km, 11 km away are world-famous Mišja peč and Osp. Also climbing areas like Risnik (Divača) and Val Rosandra (Italy) are really close. In the vicinity of the hostel there are many walking paths, as well opportunities for cycling and other trips. Hostel offers you accommodation in private rooms and in dorms with shared kitchen and bathrooms.

Bed & Breakfast Vongola in Izola is made for climbers who desire something more then just climbing in nearby areas. The vicinity of the sea, the smell of fresh Mediteranean air, comfy rooms and tasty breakfast will fulfil every climbers’ soul and will give you some extra energy for climbing as well as for your daily activities. An extraordinary venue that is really worth a visit. Once you will visit us, you will return, for sure!

SHOPS
Sometimes a small, mobile, nicely sounding shop strolls through Osp, otherwise the larger centers are in Kozina, Škofije or Koper, and a few kilometers over the border at Monte D‘Oro. There you can also find the Decathlon shop with some climbing accessories. There are specialized shops in Koper and Trieste.

HISTORY
The Big Wall of Osp has fascinated people since prehistory. In the Roman times villagers escaped under the wall from barbarians. They repeated this exercise every few years: from Turks, Napoleon, Italians, Germans and even Americans. That made them strong, tough people, who appreciate their peace and kind visitors. The first climbers were like that, starting with Italian and Slovenian alpine climbers, who practiced technical climbing in the walls. At that time Mišja was considered unclimbable, as bizzarre as it may seem today. The first routes were tackled by Emilio Comici in the 30s in Črni Kal, but that was just a start. When ladders and pulling on ropes were replaced by bolts and freeing routes, the climbing got a fresh momentum. Technical legends like Knez, Jeglič and Karo were quickly surpassed by Srečo Rehberger and Tadej Slabe, the mythical giants of Slovenian climbing, to whom we can attribute most of the hard routes in the first 15 years, the spectacular free ascent of Magična goba in live TV coverage, at the time one of the hardest routes in the world (Slabe‘s Staro kolo…) and many futuristic projects, that were conquered later by Slovenian vertical legends, beginning with Uroš Perko and Jure Golob, followed by Luka Zazvonil and Matej Sova and later by Klemen Bečan and Domen Škofic.
The climbing area is so full of history, that it is impossible to make a short recap without unjustly leaving out many important fighters against lactic acid: so here are just a few random names: Luciano Cergol, Bor Štrancar, Miha Kuhar, Marko Lukič, Igor Kalan, Betka Galičič, Erik Švab, Klemen Vodlan, Paolo Iesu, Mauro Bole Bubu,… Let‘s fondly remember also the Yugoslavian state championship of ’88, arguments about grades, stealing routes and artificial holds, superb ascents by girls (Čufar in Vizija and Gros in Histerija), visits by foreign legends (Hirayama, Hill, Tribout, Mrazek, Ondra) and traditional gathering at Johan‘s memorial.

OTHER AREAS
At nearby Divača is a crag, Risnik – a quite decent little vertical wall perfect for windy winter days. More mysterious (for objective reasons) are the bouldering place Črnotiče and spectacular summer crag Skdnj at Sežana, but for those you are on your own. Even though the new routes are generated more slowly in the last couple years, the Karst edge has enormous potential – for now only a wet dream, as the government does nothing, the locals are suspicious and the self proclaimed nature protectors are aggressive. The climbers are easy targets, so each of us has to work hard to better the negative perception about our community.

REST DAY
The land under the Karst edge, a tampon zone between peaceful stony Karst and the hustle of the coast, is one of the most pleasant and interesting natural and architectural areas of Slovenia, perfect for exploring by car, bike of on foot. While smelling the lavender, rosemary and the sea breeze you can stroll between little, grouped, stone villages with rich history, new and ruined houses and the occasional local restaurant – konoba, nestled in plantations of olives, wine and citruses. Places like Socerb, Hrastovlje, Kubed, Lopar, Tinjan, Plavje, Pomjan, Ocizla and similar are connected with wine roads and walking paths with a few hidden gems out of which we will mention only a few: St. Valentine’s church and Benko‘s old house dated to 1489 in Črni Kal; a chilly reminder in the form of Danse macabre fresco in St. Trinity church in Hrastovlje; beautiful vistas in unspoilt nature over Podgorje, Tinjan and on Ratitovec. You can shed a tear or two over the old climbing spot in Podpeč and visit the fortified church in Kubed. The rest is up to your discovery – the best way to learn about the countryside. Further afield you shouldn‘t miss natural gems like Škocjan caves, Škocjan bay at Koper and saltpan at Sečovlje with the Seča peninsula. If you‘re looking for a fun visit of a bigger city – Koper and Trieste are close enough with clubbing, swimming pools, cinemas, museums, galleries and such. Or you can try to find a local „šagra“ in the summer or some other festivity in the beginning of spring or on the 1st of May.

NOTE
The Karst edge is situated in an exceptional natural environment with a biological explosion of species, out of which 277 are endangered and 28 endemic. Apart from that, this area supports a mainly rurally oriented population, that cherishes peace and a respectful attitude. Even though spheres of interest of many groups meet in the area, the climbers should be the least problematic, which many times isn‘t the case. If you personally don‘t care about preserving a good relationship with locals, the unspoilt Karst heritage and Mediterranean nature, at least try to behave for the sake of the climbing community, that often carries the consequences of outbursts of individuals. The basic guidelines are contained in the climber‘s code in this topo, along with your common sense – act at least in the way you would want others to act on your backyard. The future may hold one more or one less nice climbing area.